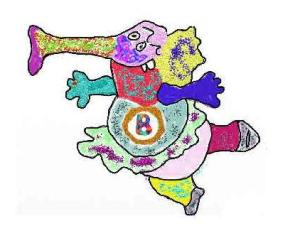 We arrived in Berkeley in September 1978, young theology students, eager to change the world.  I was, anyway.  Jim wanted to play.  He was so full of life and passion for all things beautiful.  Years later he would admit to being more immature than anything at that time.  So was I.

A month later all hell broke loose.  Harvey Milk was murdered across the Bay, and Jim’s life was never the same.  Along with several other priests in our program he claimed his identity and joined the march for gay rights in San Francisco.  The intensity of his rage frightened me for a long time, until he found peace and I found courage.  We left Berkeley, and our former selves, and continued 32 years of friendship.

Not likely to be branded as a mystic by strangers, Jim was, nevertheless, an extroverted mystic extraordinaire.  He was like King David, life spilling over in love and sin; joined at the hip to the God he so passionately loved.  At age thirty- six he wrote an essay entitled, “My Life in the Good God balloon.”  He described how he pushed, pulled and recoiled off the balloon’s boundaries, always moving closer to the center.  He said that the shape is God, and that his destiny was to always move to the limits of the shape.  He felt called to always love the shape, himself, the testing and pushing, and his fellow testers.  I am deeply grateful to live in that balloon with him and with our soul-sister Cynthia, in a new way now that Jim has died.  The balloon has expanded to massive dimensions!

Blinded by stereotypical concepts of mystics, strangers would not have readily seen the deep waters of Carmelite mysticism running through Jim.  They expected, instead, to see prayer beads, and lowered eyes.  With Jim, I got his alter-ego, Beatrice, an elephant gallivanting in a dazzling tutu, shouting to me, “Live, Reet, Live!”  I miss Jim’s irreverent humor, and even the tirades he rained down on me when fear convinced me to stand down in the face of injustice.  To honor his courage and expansive love, I stand for the rights of all those who experience injustice because of their sexual identity.  Not because it’s politically correct but because it’s right.  Here is the poem he wrote on the occasion of the Gay Pride Parade in New York in 1987.  Perhaps you too will re-frame your portrait of a mystic:

Searchers and seekers
Walking with dignity and pride.
Approaching the Cathedral:
A contradiction!

A Crucifixion?
The front steps blocked by
A blue Army in blue berets
(looking psychotic)
Shaking rosaries, thumping Bibles
Yelling “Sinners Sinners” as we passed by.

“Shame, shame, shame,” we murmured
Softly in reply.
I looked for Jesus beyond the barricades.
Not there!
“Thank God,” I said.

From the Village up Fifth Avenue.
Coming closer and closer
Passing over us
Until the whole sky was filled with
Colored balloons.

My heart burned within,
I remembered all who died of AIDS.
Gazing at the heavens,
I watched a great loving God
Gather balloons, holding them high
In God’s bright blue sky
Above the blue baracades, blue lights
Blue armies & blue shirted cops.

My God gathered these children,
Sons & daughters into a peace-filled
Eternal embrace.

I wept.
Turning, I saw two older women,
Pioneers and witnesses of the movement,
Weeping and holding each other as they
Too gazed upward.

EASTER and ASCENSION.
CHRIST HAD COME AGAIN.  GLORY TO GOD!
Peace to you and me!