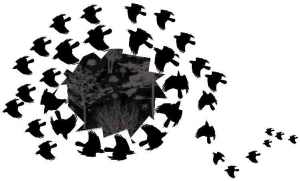 Every evening, one hour before sunset, the crow migration begins.  From my living room chair, perched on the sixth floor, I watch.  In groups of ten to twenty the birds fly past my window en route to their nesting grounds in Bothell, north of Seattle.  They fly to the wetlands on the University of Washington campus.  Other groups make their nightly pilgrimage from the Skaget Valley south to Bothell. They choose this place because the branches of the willow trees make noise when owls land on them, allowing them a safe night’s rest.

Last summer I made the pilgrimage to Bothell at dusk to take in this phenomenon. Scientists estimate that ten thousand crows congregate here. Take it from me. At least ten thousand. See the video below to get a sense of it. The sky became opaque and the air carried raucous, deafening cries. It takes a spirit of adventure to immerse oneself in the midst of them. Shortly after dark, as if a conductor had given a signal, all noise  and movement ceased. Peace prevailed in the willow trees down in the wetland. The next morning I watched groups of ten to twenty crows fly by my window, on their return trip to their day jobs.

How do they know? What tells them when and where? Is it in their genetic code? Why is it such a community venture? I don’t know. Scientists have some answers. PBS has an amazing documentary about experiments with crows by University of Washington scientists. I have come to respect and treasure these highly intelligent tool makers and profilers. But what I want to ponder here is the spiritual truths and practices crows can teach us:

INSTINCT
The crows teach me the truth about our spiritual genetic codes. Instinct is the essence and intuition its vehicle of expression. Our souls instinctively tend toward what is good, and intuition discerns the route and destination. We are most god-like when we are faithful to intuition.

COMMUNITY
“Birds of a feather flock together,” they say. Another spiritual truth is that we are not alone. Community protects and nourishes us and calls us to act justly. I imagine ten thousand persons united in the pursuit of goodness. What a goodly cacaphony they would raise!

EYES ON THE CONDUCTOR
The crow migration reminds me to listen to the conductor. We all carry the potential for intuition, but it does not develop on its own. The crows instinctively know when it’s time to go to the willow trees. Our instinctual intuition is an insturment that has to be well-tuned by practices of silence, stillness and listening. These habits ready us to see when the conductor lifts the baton. The whole process creates a sacred symphony of the Spirit which reverberates in the soul of the universe.