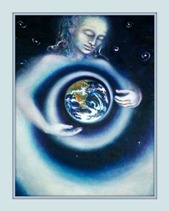 Now is the Time In Between
When the dissipated shards of last year
Crunch under the feet of the new year coming.
We watch couples stroll arm in arm in parks,
Their blithe children trailing on their Christmas bikes.
As we watch we muse
Over New Year’s resolutions
Scattered among the fragments of 2016

The spent year spins a yarn
About hawking the common good
To the highest bidder
But it was also a year
In which lost conscience
Was found.

Watchers no more, we resolve to sift the shards,
To separate life from death.
We choose Life for ouselves
And for blithe children playing.

A “SoulCard” by Deborah Koff-Chapin.  The technique Deborah has created is called “touch drawing.”  The  cards come in two decks of 60 images and can be used alone or with others as reflection tools.  They have enriched my meditation for years and have helped those I companion with.  www.soulcards.com

Used with permission from the artist

4 thoughts on “This Time In Between”